I recently read a post from Brene Brown discussing the fear of missing out (FOMO).  It was very thought-provoking.  If you’re not familiar with Brene – she deals with the ugly hard stuff like shame, vulnerability, and “enoughness”.  It’s the stuff that every single one of us faces.  The same stuff that we really don’t want to deal with – wrestle to the ground and beat into oblivion.  Much easier just to ball it up and toss it into a dark corner of the closet.

So, fear of missing out and the desire to fit in.  I didn’t realize how much I let that be my reason for doing some of the stuff I do.  Oddly (maybe) enough – it’s definitely more prevalent now than when I was in school, even through my 20’s.  Looking in the rearview mirror, in school/nursing school/20’s – I wasn’t trying to fit in out of a desire to belong to social groups or for popularity.  Nor was it an attempt to be a strong independent person.  I think on some level I realized I didn’t fit in very early in school – and that became my way of life and mindset.  I had very few good friends growing up, and the one I was closest to died when he was 20.  The others I have lost contact with.

Our 40th class reunion (high school) is this year.  I’m part of the FB group, and it is interesting to see the posts.  A very tiny part of me would like to attend – strictly out of curiosity and wondering if/what I missed out on.  The larger part of me will follow good sense and go the running event that is scheduled for the same weekend.  In truth – with the exception of some remarkable teachers and the few friends (that won’t be there anyway) – there is no benefit to going.  My memories of my classmates?  The exclusion, the bullying, the shaming, the harassing.  Actually had a teacher that did all of those things to me as well.  I’ve forgiven them, and I regret that the biggest lessons I learned from them involved not trusting people and not wanting to be a part of social groups.

Fast forward to the 50’s version of me.  More than once I have done something because I wanted to fit in – or because I didn’t want to miss out.  Truly not worth it.  Definitely a case of the grass being greener and all that.  Bugs me a bit that I felt the need after all these years, but I am a lot more forgiving of myself.  Count it as lessons learned.  Those high school classmates did teach me something – a lesson in compassion, a lesson in cheering for the apparent underdog.  And a lesson in the strength it takes to be someone that doesn’t fit in or is not afraid to miss out.

We have been blessed in our travels to make new friends and visit friends from our former church families.  Friends that are friends not for who you are, what you have, or what you can do for them.  People that don’t require you to “fit in”, or make you believe you are “missing out”.

I found this in the middle of the cow pasture we are camped in.  It is the roots from a tree that is no longer standing – just a hole in the ground with the roots left.  It reminds me that it is important to put down roots and NOT to lose yourself as you grow.  Otherwise, you’ll be left with a few roots and a hole in the ground where you once were. 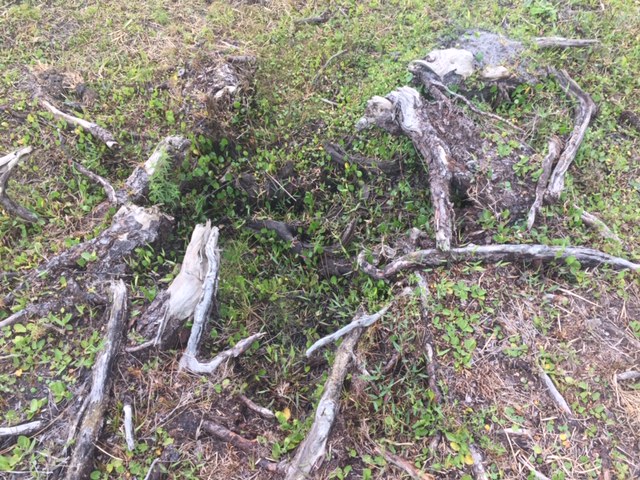