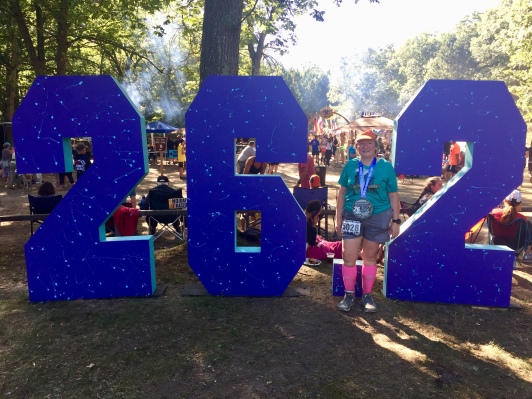 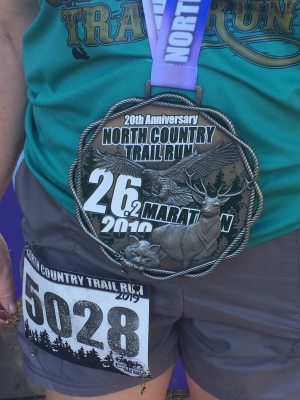 Yesterday was a fantastic day!  I completed the North Country Trail Run – Marathon distance.  To be honest, it didn’t start out so fantastic.  The alarm went off, and I crawled out of bed – 44 degrees outside – dark – ugh…and the negative thoughts went into overdrive.  “You didn’t train, you can’t do this, you’ll never finish, there will be lots of bugs, you’ll get lost, you’ll be last, the woods are scary and you’ll be alone because you are slow, etc….”  I crawled back into bed and told Bill I didn’t think I should try.  Bless him – he told me I should at least go start.

With the enthusiasm of a slug, I dressed, packed, ate a breakfast bar, and laced up.  Even packed an after-race bag with clean clothes – just in case.  We arrived just in time to hear the first wave of marathoners being called to the chute.  I was second wave, so we had a little wait – that was a little longer since the lead Ultra runner didn’t follow the course markings (and everyone else followed the leader).  The marathoners were urged to not follow the leader – instead to follow instructions and course markers.  Our delay was only about 15 minutes.  Bill wanted to take a pre-race photo – I grumped about that.  Got in the very back of the pack for the second wave and waited my turn to cross the start line and start my watch.  And I started walking.

The past couple of months have been a huge blessing.  If you followed our blog about traveling – you know we have been truly blessed.  The traveling wasn’t exactly compatible with marathon training – especially after we had some trouble with altitude and heat.  Then some other stuff happened.  Pretty much my training consisted of making sure I got 10,000 steps a day and logged at least a mile a day walking while aiming for 25 miles a week.  For the past couple weeks, I have been doing aqua aerobics with the Ageless Goddesses twice a week.  Additionally, I have been making sure to get daily doses (and sometimes overdoses) of positive content, watching my nutrition, my hydration, and my sleep.  Sleep hasn’t been so good lately – but getting much better now.

Training for a marathon is more than physical preparation.  This was plainly evident this time.  My first marathon attempt was not successful – and I had trained according to plan physically.  During that training, someone made a comment that there was a good chance I wouldn’t complete the event, and quoted statistics.  You can’t unhear something like that.  The seed was planted.  I don’t believe that was the only reason I didn’t finish, but it set the stage.  My second marathon attempt was delightfully successful.  I was surrounded by people who assured me I would complete the event, and accompanied by my Rockstar daughter – and mom wouldn’t let her daughter down!  My physical preparation for that marathon was not as complete as the first try – but my mental preparation was far more thorough.

This time, I knew that my time constraint was much more lenient than the usual marathon time limit.  The terrain would be different – but hey – we’re talking Michigan here – and I am staying within 10 miles of the event course – hills?  Surely this won’t be a problem.  Then, about a week ago, I looked at the course description – that included elevation change for the course…4,233 feet.  Well, now, that is a surprise!  Probably “chump change” to experienced trail runners – but not to this newbie!  I saw the description for “single person path”, deer path, and narrow path; for beach sand (?!); and wooded and shaded terrain.  Still, I convinced myself this could be accomplished.  Technically, I could walk a 30-minute mile and still finish.

So, off we go.  At the beginning, I was telling myself I only had to get to the next aid station (every 3-4 miles) and I could stop – and just get a ride back to the finish.  I ran into a group of ladies that, for a variety of reasons, hadn’t been able to train properly either.  We chatted, moved on, regrouped, and generally stayed fairly close to each other until around mile 13.  By the time I got to the second aid station, I had pretty much decided I wouldn’t need to pull the plug unless something major went wrong.  After mile 13 – I was alone unless I was being passed by other runners.  The course was being used by the Ultras, the Marathoners, and the Halfs.  By mile 18, I was going to complete the course by whatever method necessary.

I called Bill from the halfway point – I had climbed a “hill” (and not a small one!) and discovered excellent cell reception.  I wanted to let him know that my intention was to see him at the finish line.  Bill is a wonderful person – and I am thankful that I am married to him.  He puts up with an awful lot from me!  Hearing his praise was just more fuel for the journey.

Highlights from the experience – there are so many – but I want to share a few:

-Friday night, I made a prayer list.  It was numbered 1 to 27 – one for each mile and for the 0.2 (actually 0.5) miles.  Each number had a name by it.  As I traversed that mile, I said prayers for the person(s) listed.  At the finish line, the list was sweat-stained and tattered – and a whole bunch of prayers had been lifted.

-At the second Aid Station (with the first Portajohn), a runner that had done this run before encouraged us to use the “real” facilities whenever possible to avoid the poison ivy that was apparently rampant in some areas.  Suddenly, waiting a few extra minutes seemed preferable to the local pine tree.

-The course description of “just enough tree roots to keep it interesting” didn’t do justice.  I’m pretty sure I did enough “take-offs” to keep me current for a couple years.  Fortunately, the landings were intentional and on 2 feet.  I did watch a Rockstar runner trip, roll twice, spring back up and never miss a beat!  He looked to be in his 60’s.

-Mosquitoes – horrid little blood suckers – I used almost a whole can of Deep Woods Off by myself.  Even sprayed it in my ears.  At some of the Aid Stations, the volunteers stood at the end waiting for runners and they would shower them with repellent.

-Aid Stations – little bits of heaven staffed by angels!  Most of the stations were staffed by scouts or other youth organizations.  Their enthusiasm was contagious, they were truly delightful – and each station was like a mini-buffet.

-Single person path, deer path, sand, forests – thank goodness for the little pink flags!  That meant I was still headed in the right direction.  Sometimes the path was barely discernible, some areas were almost overgrown, and many were very narrow.  And how in heavens name do you find beach sand on a hill in northern Michigan?  In the middle of a pine forest?  And those hills – some might qualify for baby mountains…the signs that said “Caution – Hill” – they mean it – it marks a downhill grade that has you wishing for snow and a sled!

-Fellow racers – unbelievable compassion and support.  Not one impatient or rude runner.  And clean – I saw one GU packet on the ground and it was picked up by another runner.  A couple of cups – again, they were snatched up.

-Beauty, majesty, solitude – especially in the alone part of the run.  It was like living a hymn of praise.  At mile 26 – you end up at a particularly high point with a spectacular view overlooking the area.  It simultaneously took my breath away and brought tears to my eyes.  A lovely reward for climbing that last hill!  (Then it was literally all downhill to the finish line!) 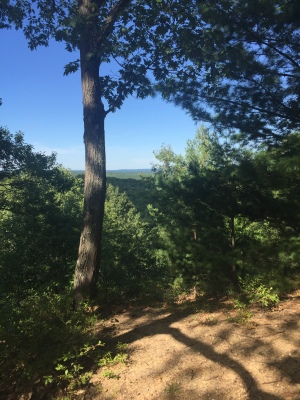 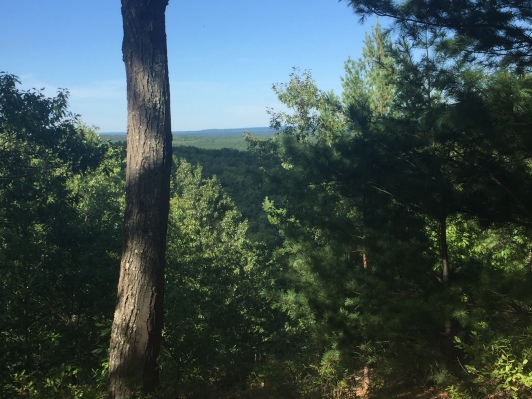 -Crossing the finish line to cheers, well-wishers, seeing Bill and my Mom, claiming my medal and a bottle of water, and my hugs.

-Realizing again that I am stronger than I know, I really can do a marathon (confirming that the last one wasn’t a fluke), and that believing in yourself is vital.

Today, I am sore – but it’s tolerable.  Moving about helps.  Logged my 10k steps, and 2.5 miles.  Bill treated me to ice cream, and we went to the therapeutic pool for gentle exercise.  Yesterday I said it was a one and done.  Today I’m thinking I will think about it.  When you sign up for an event like this, you tend to not think about what you will feel like afterward.  Your muscles hurt – not just your legs, but your chest and arms.  Your feet are sore and blistered (gonna lose a couple toenails again) and flipflops become your footwear of choice.  You want to sleep a lot.  And with every ache and pain, you just smile and think about the 26.2 miles you conquered.  And you know that it is so much more than the mileage.  You’re not the same person that crossed the start line.  You have left a lot of ugly baggage out there along the course – and you gained so much more beautiful “stuff”.

Do a marathon (but be smart about it and train) – you won’t be the same!